How the UNIDACHS 220 reduces the construction time to a fraction

The telescopic boom, that can be rotated through 360 degrees, offers additional degrees of motion and makes it easier to work overhead

During the renovation of the Maroggia tunnel, the use of a TML UNIDACHS 220 was able to reduce the time required to demolish the existing masonry lining and break out recesses in the ridge to a fraction of the time that was previously needed. The compact design made it possible to maintain single-track rail traffic in the tunnel through the duration of the repair period.

During the renovation of the Maroggia tunnel near Lake Lugano, a UNIDACHS 220 has proven itself in one of the first uses in tunnel construction. As part of the “4m Basel – Chiasso / Ranzo corridor” project, SBB has expanded the profile of the tunnel. Due to a special proposal, not to close the tunnel and work on the entire cross-section but to work only on one side at a time to carry out the profile expansion, which shortened the construction time to around 1.5 years.

The compact design of the UNIDACHS was an essential element in ensuring that all work could be carried out while the train was running on one side of the tunnel.

The old masonry had to be demolished and openings for anchoring crossbars in the roof had to be dug out. This resulted in a considerable amount of overhead work for which conventional style excavators are only designed to a limited extent. In addition, the working space was very limited: around 200 trains per day travelled past the construction site at around 80 km / h on the neighboring track. Here, too, the telescopic boom scored points, because due to its compactness, it was guaranteed at all times that no portions of the machine protruded into the clearance profile of the second track on which the trains ran. 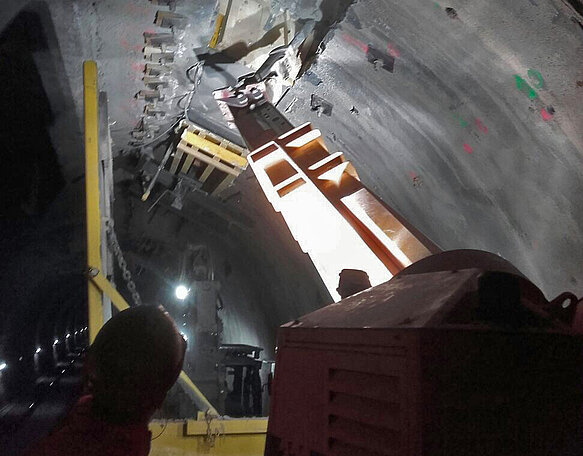 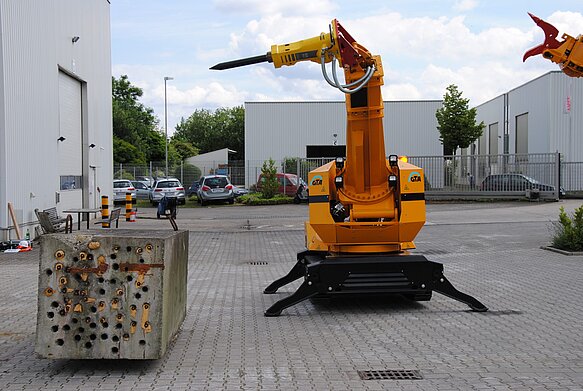 Marti, the general contractor for the project, recognized the potential of the special kinematics of the UNIDACHS 220 and rented the machine for the duration of the construction period. Based on the positive experience, Marti decided to purchase the machine after the construction work was completed in order to use it again in a number of other projects.

For the work in the tunnel, the machine was equipped with a hydraulic hammer weighing around 350 kg and worked from a platform wagon. This meant that the train wagon with UNIDACHS could be driven out of the tunnel along the tracks at any time to make room for concreting work to be done.

The UNIDACHS 220 has proven itself in every detail during the construction period. Despite the small size, the machine with the telescopic rotary boom, reached the complete profile without repositioning, and also achieved high precision working results in the tunnel roof. With the remote controls, the operators were able to work from a safe distance and still had an optimal view of the working area.

Even before the project, GTA had been looking for a manipulator for various attachments that was compact enough to excavate material when renovating tunnels in cramped conditions. For overhead work in particular, the only machines that were available on the market were only suitable for such work to a limited extent.

So GTA got in touch with TML Technik. TML originally developed the UNIDACHS 220 for cleaning and demolition work in the metallurgical industry. But the telescopic boom, which can be rotated endlessly by 360 degrees, also makes it attractive for tunnel construction: In comparison with conventional excavators and other demolition machines, the TML UNIDACHS 220 has additional degrees of motion. In this way, the attachment tools can be placed to the surface to be processed at almost any angle.

In mining and tunnel construction, the machine that Marti used under the name MULTIRIPPER 220 is suitable for, among other things

In addition, it can accommodate drilling rigs and tools for setting frames and arches, anchors and shotcrete spraying nozzles. With the remote control, the driver works from a safe distance.

„Thanks to the unique kinematics of the MULTIRIPPER 220, we were able to work much more faster than with conventional articulated arm type excavators. Our work team were particularly enthusiastic about the high level of precision they were able to achieve when breaking out the recesses for anchoring the crossbar. And the remote-controlled operation has made a massive contribution to the high level of occupational safety. “

GTA develops and manufactures working platforms, spraying and extension manipulators as well as drilling devices for the bottom and for the upper working level, as well as vehicles for inserting extension parts and for shotcreting for tunnel construction and repairs.

For 40 years, GTA has stood for economical, efficient and safe work in conventional drifting.
Modern construction and manufacturing methods as well as user knowledge and project experience guarantee the fast and practical development of machines in cooperation with the customer. Numerous examples demonstrate the efficiency of special solutions in international tunnel construction.

Do you have any questions about our machines and applications?
Contact us.

At your side all over the world

The protection of your data is important for us.
Click on "Activate" to allow us requesting google servers to show Google Maps.